W hen power outages occur during natural disasters and other emergencies, the use of alternative sources 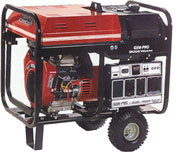 of fuel or electricity for cooking or powering homes can cause carbon monoxide (CO) to build up in a home, garage or camper to poison the people and animals inside.

CO is an odorless, colorless gas that can cause sudden illness and death if inhaled. Every home should have at least one working carbon monoxide detector. The detector’s batteries should be checked at least twice annually, at the same time smoke detector batteries are checked.

Every year, more than 400 people die in the U.S. from accidental CO poisoning. Exposure to CO can cause loss of consciousness and death. The most common symptoms of CO poisoning are headache, dizziness, weakness, nausea, vomiting, chest pain and confusion. People who are sleeping or who have been drinking alcohol can die from CO poisoning before ever having symptoms. 68202003

Generators, grills, camp stoves or other gasoline, propane, natural gas or charcoal-burning devices should never be used inside a home, basement, garage or camper – or even outside near an open window. When the lights go out during storms, there’s nothing more welcome than a portable gas-powered generator. It’s hard to believe, but a single generator can create as much as one hundred times more poisonous carbon monoxide gas than a car’s exhaust. If the generator is operated too close to a house, the invisible and odorless toxic gas can easily enter the home.

According to a study by the Centers for Disease Control and Prevention (CDC), nearly half of the non-fatal CO poisonings reported during 2004 & 2005 hurricane seasons involve generators run within seven feet of a home. Here are some other ways to prevent CO poisoning in your home:

• Install a battery-operated or battery back-up CO detector in your home and check or replace the battery when you change the time on your clocks each spring and fall. Place your detector where it will wake you
up if it alarms, such as outside your bedroom. Consider buying a detector with a digital readout. This detector can tell you the highest level of CO concentration in your home in addition to alarming. Replace your CO detector every five years.

• Have your heating system, water heater, and any other gas, oil, or coal burning appliances serviced by a qualified technician every year.

• Do not use portable flameless chemical heaters indoors.

• If you smell an odor from your gas refrigerator have an expert service it – this could mean it is leaking CO.

• When you buy gas equipment, buy only equipment carrying the seal of a national testing agency, such as Underwriters’ Laboratories.

• Make sure your gas appliances are vented properly. Horizontal vent pipes for appliances, such as a water heater, should go up slightly as they go toward outdoors. This prevents CO from leaking if the joints or pipes aren’t fitted tightly.

• Have your chimney checked or cleaned every year. Chimneys can be blocked by debris and this can cause CO to build up inside your home or cabin.

• Never patch a vent pipe with tape, gum or something else. This kind of patch can make CO build up in uour home.

• Never use a gas range or oven for heating.

• Never use a generator inside your home, basement or garage or less than 20 feet from any window, door or vent.

• When using a generator, use a battery-powered or battery backup CO detector in your home.