Each year, West Florida Electric Cooperative (WFEC) takes the opportunity to honor its employees with a 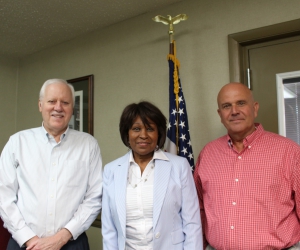 Christmas party and award presentations. Our employees and their families enjoyed visits with Santa and Mrs. Claus and children wrote letters to Santa telling him what they wished for this Christmas during the event. Since this is the only time of year that our employees are all able to gather together in one room,
the co-op uses this opportunity to present awards and recognize those individual employees who go above and beyond the call of duty. The awards presented during the event include service anniversary awards, outstanding service awards and of course, our employees of the year awards. 44580006

This year, Vivian Daniels, a cashiering coordinator in the Graceville district was named Administrative Employee of the Year by her peers at the event held December 5. Daniels was chosen to receive this award by her co-workers because she best exemplifies the following traits: personality, punctuality, safety habits, team work, flexibility and outstanding performance on the job. Her employment with WFEC began in 1998 working part-time at night as a member service representative and became full-time in 2013. She has a bachelor’s and master’s degree and retired after thirty-five plus years of professional work experience including teaching, counseling, and supervisory/managerial capacities for several different schools systems and agencies in several states. In her spare time, she enjoys traveling and spending time with her family. Her travel interest and enjoyment was sparked by her deceased spouse’s career in the military. She continues traveling with her daughter, son-in-law and granddaughter. Ms. Viv (as everyone at the co-op calls her) states that at this point in her life, it’s all about peace, experiences and giving.

“I feel humbled, honored and very appreciative to have been voted Administrative Employee of the Year by the WFEC staff. I enjoy working with both internal and external customers and it proves that ‘seniors’ can be an asset in the workforce,” said Daniels.

This year, employees not only chose an Administrative Employee of the Year, but also selected an Engineering & Operations Employee of the Year, which turned out to be a tie. Anthony Register and Holley Brown were selected by their co-workers to receive this award because they best exemplify the following traits: personality, punctuality, safety habits, team work, flexibility and outstanding performance on the job.

Register, a line crew leader in the Bonifay district, oversees power line construction and maintenance and also participates in storm recovery efforts throughout the U.S. He began his career at the co-op 37 years ago as a tree trimmer. Register and his wife, Donna, have been married for 37 years and have two daughters, Jessica and Jennifer. The Registers also have several grandchildren. During his spare time, he enjoys fishing, traveling and camping. 79704002

“It is a high honor – one of the best that is bestowed upon an individual at WFEC, my fellow employees are some of the best people I know,” said Register.

Holley Brown, Purchasing Coordinator, has worked at WFEC for nearly three years. She began her career as a billing coordinator and transferred to the purchasing department last year. Her daily duties involve purchasing line materials, poles, tools, fuel, vehicles and other items necessary to run the cooperative and facilitate work. She also sends out bids and assists with awarding contracts and bids to contractors and vendors for all three district offices. She is married to Ryan Brown, of Chipley, and they have a five month old daughter named Georgia Kate. In her spare time, Holley enjoys spending as much time with her family as possible. She said that she was very honored to have been chosen to receive this award and that it is very special to her.

Josh Rabon, a journeyman line worker, from the Sneads district, Rodney Bowers, a line crew leader, from the Bonifay district and Brandon Taylor, Associate Field Engineer, from the Graceville district were each honored with Outstanding Service Awards. These employees were chosen to receive these awards because they best exemplify the following traits: personality, punctuality, safety habits, team work, flexibility and performance on the job. 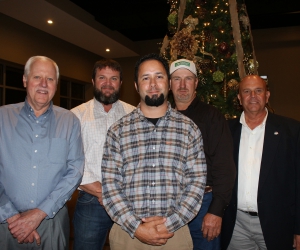