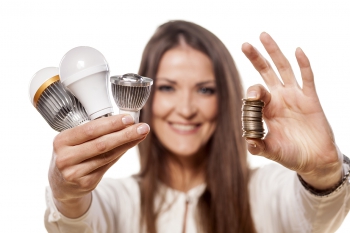 bill? An average household dedicates about five percent of its energy budget to lighting. By replacing your home’s five most frequently used light fixtures with models that have earned the ENERGY STAR, you can save about $75 each year.

ENERGY STAR-qualified LEDs use only 20-25 percent of the energy and last 15-25 times longer than the traditional bulbs they replace. LED bulbs come in a variety of colors and some are dimmable or offer convenient features such as daylight and motion sensors. LEDs work well indoors and outdoors because they are durable and can perform well in cold environments. LED lighting is available in a wide variety
of home and industrial products, with the list growing each year:

Industrial & Commercial Lighting
The high efficiency and directional nature of LEDs make them ideal for many industrial uses. They are
becoming increasingly common in street lights, parking garages, walkway lighting and other outdoor areas. They are also being used in refrigerated case lighting, modular lighting and task lighting.

Kitchen Under-Cabinet Lighting
Since LEDs are small and directional, they are ideal for lighting countertops for cooking and reading recipes. The color can appear more cool or blue than is typically desirable in a kitchen, and there can be some excessive shadowing in some fixtures, so it is important to compare products to find the best fixture for your space.

LED Replacement Bulbs
With performance improvements and dropping prices, LED lamps can replace 40, 60 and even 75 Watt incandescent bulbs. It’s important to read the lighting facts label to make sure the product is the right brightness and color for the intended location.

LED Holiday Lights
LEDs consume far less electricity than incandescent bulbs and decorative LED light strings such as Christmas tree lights are no different. Not only do LED holiday lights consume much less electricity, they
also have the following advantages:

• Safer – LEDs are much cooler than incandescent lights, reducing the risk of combustion or burnt fingers
• Sturdier – LEDs are made with epoxy lenses, not glass and are much more resistant to breakage
• Longer lasting – the same LED string could still be in use 40 holiday seasons from now
• Easier to install – up to 25 strings of LEDs can be connected end-to-end without overloading a wall socket

LEDs are also safer because they contain no mercury. A recent Energy Department study determined that LEDs have a much smaller environmental impact than incandescent bulbs did.

While LEDs are more expensive, they still save money because they last a very long time and have very low energy use. Good quality LED bulbs can have a useful life of 25,000 hours or more. That is more than three years if run 24 hours a day, seven days a week.

If the United States switched entirely to LED lights over the next two decades, it could save $250 billion in energy costs, reduce electricity consumption for lighting by nearly 50 percent and avoid 1,800 million metric tons of carbon emissions!