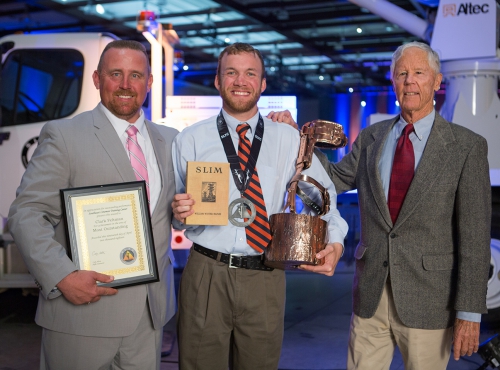 "I learned a lot at SLTC - it was fun to meet new people and learn about the job. Learning in a classroom setting was great - overall, it was an invaluable experience. But, to me, the biggest thing I learned was how and why to do things safely. I feel like they did a good job of teaching us how to be safe before we did the work," said Feltman.

Upon his graduation from SLTC, he was awarded the SLIM award. This prestigious trophy is awarded to the top student from each graduating class. Feltman was chosen to receive this honor over 202 other students. The award is granted based on classroom scores, ability to perform different physical tasks, such as climbing, and the efforts displayed towards helping others in his pole circle. He was voted “Best All Around” in his pole circle and was selected number one out of a total of 11 “Best All Around” students to earn this recognition. 77706002

Here’s a little more background about SLIM and why it is used as an award at SLTC:

In 1934, William Wister Haines, a 24-year-old lineman ceased his employment for a while, holed-up and wrote a book about the adventures of a young lineman breaking into the trade. That book, SLIM, become a national best seller, enjoyed by thousands of readers who knew nothing about linework. It was just a great story and could only have been written by someone who had lived linework. Warner Brothers purchased the rights to the movie, hired Haines to write the screenplay, help with technical direction and arranged for Henry Fonda to play the title character.

William Wister Haines experienced the life of a “boomer” from 1926-1930, then did catenary work on the Pennsylvania Railroad for three years. Only a man who started as a grunt, dreamed of putting on the gaffs, climbed poles and towers, worked in ice, hail and snow, and survived linework’s everyday dangers could describe the life of a lineman so well that his thoughts and words would ring true nearly a century later.

In 2009, Bill Haines, Jr., son of the author, republished 250 copies of the book and they sold out within four days! Once the book became available, several organizations began using copies of the novel as awards - for topping out (achieving the highest level of expertise a lineman can attain), prizes at rodeos and Southeast Lineman Training Center’s “Slim the Lineman - William Wister Haines” award.

“Slim sets an example-he’s the lineman who is totally dedicated to the trade, to the process of continuous learning, being the best possible lineman and above all, to safety. While the book was written about line work in the 20s, these principles remain paramount. The illustrations by Robert Lawson, of work in those early days, are fantastic,” said Haines.

The last publication of the book was over 50 years before its second publication and old grainy copies of the movie had become treasures. Generations had been skipped and linemen had no way to know that the movie came from an exciting, powerful novel.

“A personal copy of the book is one that a young lineman can treasure forever-a symbol that he succeeded with years of rigorous training and is headed for a meaningful, challenging career,” said Haines.

When asked how he felt when he was selected to receive the SLIM Award, Feltman said, "It was probably one of the best feelings I've ever had. It's a great accomplishment for me and I was at a loss for words."