Keeping your home at a comfortable temperature can be expensive – especially during summer in the south. A typical household’s energy bill runs around $2,000 annually & almost half of that goes toward heating & cooling costs. 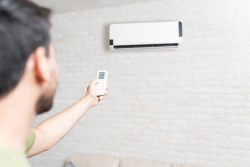 To help cut these costs, an increasingly popular and versatile system – a mini-split system can be installed. Ductless split-system air conditioners and heat pumps, sometimes call mini-splits, are air conditioners or heat pumps that do not use ductwork for air distribution. Mini-splits are different than regular split-systems. They are used mostly for smaller area cooling. Some of these systems are capable of connecting to 2, 3 or even 4 indoor units to act as a single system. Mini-split systems are very common in Europe and Asia but are less than 5% of the U.S. market. However, that is beginning to change.

Ductless split systems are a good option for:
• Older homes that do not have ductwork to accommodate a conventional ducted system
• Homes or businesses that have hot or cold spots
• Additions
• New construction

“I chose to go with a mini-split system because it is cheaper to run, uses less energy and the comfort level inside my house is better than with my previous conventional unit,” said Mike McFatter, a WFEC member who lives in Chipley.

McFatter recently installed two mini-split systems in his home. He says that most days this summer he’s only run one of his two units to cool the bedroom, living room, bathroom and kitchen of his home. On extremely hot days, he runs both units to maintain his comfort level but hasn’t used his conventional unit even once since installing the mini-splits. His conventional unit is still operational and he plans to utilize it in the case of an emergency.

Ductless systems are made up of four components:
1. the condensing unit, located outside the building
2. the indoor unit, or units, which can be wall mounted, suspended from the ceiling or mounted in the ceiling
3. refrigerant lines, which connect the outdoor unit to the indoor unit
4. a hand-held wireless remote or wall monitor which controls the entire system

Some other advantages of these systems include:
• Cutting cooling costs by 30% compared to conventional room air conditioners. ENERGY STAR certified ductless min-split heat pumps use more sophisticated compressors and fans that can adjust speeds to save energy.
• Cutting heating costs in half compared to conventional electric heating systems. Because they transfer instead of generate heat, ENERGY STAR certified ductless mini-split heat pumps use 60% less energy than standard home electric resistance-based heating systems.
• Avoiding ductwork. Instead of difficult-to-install, leaky and bulky ductwork, ductless mini-split heat pumps use an indoor unit connected to an outdoor unit via refrigerant lines (which only need a three-inch hole in an outdoor wall for installation). Up to 8 indoor units can be attached to one outdoor unit on larger models.
• Allowing for Different Climates for Each Room. Each indoor unit can provide customized heating and cooling -- adjustable through wall consoles, remote controls and smart phone apps -- in each conditioned space.

Rebates are offered from WFEC to members who install a mini-split system in any type of home. Rebate amounts vary depending on SEER rating and BTUH output.

If you are interested in installing a mini-split system, take advantage of incentives being offered this year. ENERGY STAR units are eligible for a federal tax credit of $300 if installed in a primary residence by December 31, 2020. Learn more at www.energystar.gov/taxcredits.