Peel Retires with 40 Years of Service 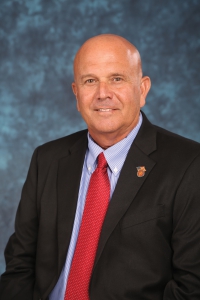 serving its members in various capacities for 40 years.

His career at WFEC began on January 4, 1982 in the right-of-way department. During his long career at the co-op, Peel has served its members as an energy advisor and member services employee. He also ran the co-op’s safety program, the safety and transportation department, and oversaw the cooperative’s loss  control and risk management department before taking over as Vice President of Engineering and Operations in January 2003. He served in that capacity until he was awarded the Executive Vice President & CEO position in January 2019 upon the retirement of his predecessor.

Peel says that during his time working at the cooperative the advances in technology were some of the biggest changes he saw that impacted the industry. Other notable changes occurred when all lineworkers and mechanics had to earn their commercial driving licenses or CDLs. He said that the transition was a big undertaking for his department at the time. He also said changes to OSHA rules and guidelines, environmental requirements becoming more stringent, and dealing with limited generation resources have been major challenges facing the industry.

Looking back on his long career, Peel said he is especially proud of the part he played in building the landfill gas to energy facility at Waste Management, securing Enviva, the co-op’s largest industrial member, and earning all of the safety awards and recognition (in particular the State President’s Safety Award) received by WFEC for excelling in that area.

Peel was born and raised in the Chipley area and is a graduate of Chipley High School. After graduation, he enlisted in the United States Marine Corps where he served four years as a member of Marine Fighter Attack Squadron 235. During his military career, he earned his pilot’s license and attended the Marine Corps NCO Academy. In 1991, Peel joined the Air Force Reserve Special Operations Unit at Duke Field. While in the Air Force Reserves, he had the opportunity to attend the Staff NCO Academy as well as Vincennes University (Community College of the Air Force).

When he was Manager of Loss Control, his Air Force Reserve Unit was deployed as a part of Operation Enduring Freedom. He was stationed in parts of Southeast Asia including Pakistan and Afghanistan from 2001-2002. In 2006, he made the decision to leave the reserves and focus solely on his career at WFEC.

During his career, Peel was also honored to serve on the PowerSouth Energy Cooperative Board, the Florida Electric Cooperatives Association Board, and many others. He also graduated from the Robert I. Kabat Management Internship Program (MIP) in February 2018. MIP is a prestigious and comprehensive program that provides in-depth analysis of the functions and processes of co-op management at the University of Wisconsin, Madison.

As he retires, Peel is looking forward to doing some forestry work, flying (as he plans to purchase a new plane), fishing, hunting, spending time with his family, and being a proud grandfather.

“It is bittersweet to be leaving. I have been very blessed. The co-op has been very good to me and blessed my family. I will never forget that. Beingpart of a family [who worked] in the utility business – my dad was with Gulf Power for 37 years – and I finished my career as CEO with 40 years of service, my mom and dad would be proud,” said Peel. “Over 40 years, you meet a lot of people, and somewhere along the way, you will have an influence on somebody. I hope that I have been a good influence and was able to help people when I could. I am so thankful to have the opportunity to serve our members and I have tried to do that with honesty and integrity. Semper Fi,” he said in conclusion.