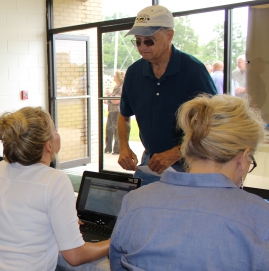 8:00 a.m. until noon. Members were greeted by two bucket trucks and a very large American flag as they entered the event grounds.

One of the activities enjoyed by members was a health fair. Representatives from Eye Center South, Covenant Hospice, Northwest Florida Community Hospital and the Jackson County Health Department were on hand to provide valuable information about eye health, home health, end of life care and other health related information. Other activities included wood turning demonstrations by Harry Wheeler and
Keith Forehand and a quilting demonstration by Sherry Burkhalter.

Electrical safety demonstrations were provided throughout the event by West Florida Electric Cooperative employees, Donnie Worley and Rick Hodge, while pony rides, face painting and a bounce house rounded out the slate of activities available at the event. 86204001

WFEC Executive Vice President & CEO, Russell Dunaway, also addressed the crowd. Results of the cooperative’s board of trustee elections were announced the week before the meeting and at the meeting itself. Those results were:

During the meeting, member-owners also had the opportunity to win a variety of prizes such as electric grills, small appliances, electronics and more. Complimentary soft drinks and face painting services were provided throughout the day by cheerleaders from Bethlehem High School.