Saying Goodbye to a Longtime Trustee

A.C. Miles,member of the WFEC Board of Trustees, died March 26 at the age of 81. Miles was a member of 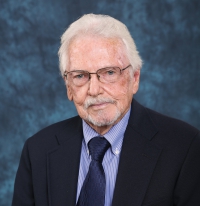 WFEC's board for 28 years and served the members in many capacities during that time including several terms as president. He also served as secretary-treasurer, vice president, was a Credentialed Cooperative Director, and represented WFEC on several affiliated boards and committees.

“Mr. Miles was a longtime voice for the members on WFEC’s Board of Trustees. His knowledge, expertise, commitment and friendship will be missed,” said Joe Rone, President of WFEC’s Board of Trustees.
A native of Jackson County, Miles was born on January 30, 1938 and attended elementary and high school in Campbellton. His education also included an A.A. in Accounting from Ohio State and a B.A. in Business Management received while in the U.S. Air Force. He also attended numerous military schools and academies including flight training.

Miles served in the U. S. Air Force for 23 years and was a flight engineer for C130s, C141sand 135Bs. During his military service, he earned a Distinguished Flying Cross in addition to three air medals for combat  missions in Vietnam. He followed his military service with over 10 years as a district manager for Holiday Inn Hotels. During his retirement Miles farmed and served his local community in several ways including as Commander of the Disabled American Veterans Chapter 22, Jackson County and President of the Widowed Persons Service of Jackson County. He also led efforts to complete an upgrade on the Eternal Flame Monument, which honors veterans, at the Jackson County Courthouse.

In his spare time, Miles enjoyed old cars, raising horses, and making knives. He also loved racing motorcycles in his younger years. Miles also loved serving on WFEC’s Board of Trustees – he said he enjoyed being a voice for the co-op’s members and serving them to the best of his ability.

“It was a pleasure to work with Mr. Miles over the years. He was a loyal, dedicated board member who truly kept the best interests of WFEC’s members in the forefront of his mind when making decisions. He loved this co-op and served the members he represented with integrity. His insights and input will be missed by myself and the cooperative’s board of trustees,” said Ty Peel, WFEC Executive VP & CEO.