Time of Use Matters

Did you know you can help your electric co-op by simply glancing at the clock? The key to that help is a 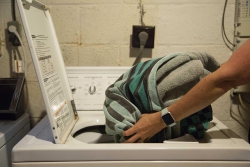 term used in the energy industry called “time of use.”

Electricity follows the basic economic laws of supply and demand—when a lot of people want something, it’s expensive; when they don’t, it’s cheaper. Energy is more expensive during certain times of the day because more people are using it.

The role you play can be as simple as washing and drying your clothes a couple hours later than usual. Why would you want to do that? One reason has to do with the fact that as a co-op member, you and your neighbors own your electric cooperative.

But helping with time of use can be more than a feeling. It can translate to real dollars.

Your electric co-op pays more for electricity during those morning and evening peak demand hours in two ways: either by having a power plant to make sure enough electricity is available, or by actually paying more to purchase electricity from another utility with excess power at the time. And those peaks in energy use get even higher when it’s especially hot or cold outside, as air conditioners or heaters use extra power.

We refer to the time that members need electricity the most as peak demand and we are required to have enough electricity generation capacity to meet that peak demand.

You can help level out that pattern of energy peaks and help reduce the co-op's system capacity requirements by simply adjusting when and how you use electricity.

Changing those energy use habits could also make a difference on your electric bill. By shifting the time of day that you perform tasks that require major energy consumption like washing and drying clothes, you can help the co-op reduce its peak demand. By reducing peak demand, we reduce the system capacity requirements, which in turn reduces the need for more generation or power plants. This can help the co-op hold-the-line on rates and also reduce the co-op's carbon footprint.