Count Your Freedom As a Blessing

As Thanksgiving approaches and we begin counting our blessings, and there are many, one in particular stands out - freedom. As we enter this season of thanks, another holiday that is observed this month is often overlooked.

“The veterans of our military services have put their lives on the line to protect the freedoms that we enjoy. They have dedicated their lives to their country and deserve to be recognized for their commitment,”
said Judd Gregg, 76th Governor of New Hampshire and a former U.S. Senator.

As Veterans Day is celebrated this month, WFEC would like to thank all of the veterans who so faithfully served our country and made the freedom we enjoy on a daily basis possible. One such individual is Milton
Mooneyham of Dellwood, a 98-year-old World War II veteran. He was drafted into the Army before he even 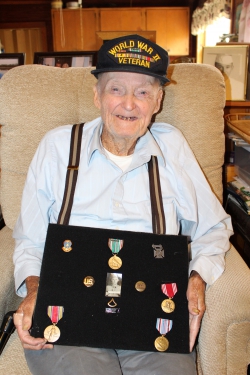 graduated from Greenwood School in 1941. The military allowed him to graduate and complete his classes
before he reported to basic training.

In fact, Mooneyham’s older and younger brothers, Emmett and Lester, were both also drafted, but only Milton saw combat. Mooneyham was in the 8th Infantry (Pathfinder) Division, which left New York Harbor on December 5, 1943 heading to Belfast, Ireland to wait for the D-Day invasion. His unit’s landing took place on July 4, 1944 on Omaha Beach. The 8th Division entered combat just three days later on July 7 to help capture the French city of Rennes in August and Brest in September. They then joined the heavy fighting in the Hurtgen Forest in November. By the time WWII ended, Private Mooneyham had endured four major battle campaigns in the European Theater Operations: Normandy, Northern France, Rhineland and Central
Europe. Units in his division had taken prisoners of war and sustained many battle casualties. On three separate occasions during the war, his weapon was damaged by gunfire or shrapnel.

“We were in France and there were hedge rows instead of fences. We had dug into the side of the hedge row and got in there for cover. We had our guns standing up so we could get to them when we needed them and one of the pieces of shrapnel cut my gun in two,” said Mooneyham.

That shrapnel was deflected by his rifle and passed through his cartridge belt, burning his hip – the
only injury he received in battle. He said he kept the piece of shrapnel for many years until one of his
buddies asked him why he would keep something that could have taken his life. On another occasion,
Mooneyham and his fellow soldiers had a close encounter with German troops.

His unit also helped free the Wobbelin Concentration Camp just days before the European Campaign ended, which had about 5,000 prisoners. The SS had established Wobbelin to house concentration camp
prisoners evacuated from other camps to prevent their liberation by the Allies. Living conditions were deplorable and most of the prisoners were starving.

“When you see a human being who is starved to death, you can look and see his eyes, it’s hard to realize someone would throw them in a field just like these fields around here and their body would be like that. It was one of the worst things I ever saw in my life,” said Mooneyham.

When the European Campaign ended, Mooneyham was allowed to come home for a brief visit, knowing he was scheduled to go to the Pacific Theater. However, President Truman made the decision to drop the atomic bombs on Japan the day before he was set to leave and Japan surrendered.

“I was listening to the news on the radio because there wasn’t a TV or anything like that and they said that Japan had surrendered and I knew I wouldn’t have to go,” said Mooneyham. And, he was right, he didn’t have go to the Pacific and was soon allowed to leave the Army, receiving an honorable discharge in October of 1945.

Along with many others, another local veteran who deserves our gratitude for his service is Willie E. (Jack) Tucker of Graceville. He grew up in Campbellton and graduated from St. Paul School in 1965. He was drafted into the Army in 1966 and served our country for a total of 23 years, retiring as a Master Sergeant.

During his time in the Army, Tucker was an MP and also served in the Chemical Corps, training and ensuring all troops had the necessary equipment they needed to protect them against chemical warfare. Tucker also served during the Vietnam War, the longest in U.S. history until the Afghanistan War.

Tucker was deployed to the Quinn Yan area of Vietnam during most of his time there.

“I was in the Tet Offensive and it was a sobering time,” said Tucker. “We usually guarded POWs, did
hospital security and then toward the end of my time there, we conducted highway patrols, so battle like
that was a little bit different for us” he continued.

Tucker says the uncertainty and not knowing if he would come home was something that he thought
about a lot during his time in the military. He also said he learned leadership and discipline during his
time in the service, which have both served him well over the years.

After the war was over, Tucker decided to continue his career with the Army and was eventually stationed
in Germany, Spain and Hawaii. He and his wife of 50 years, Jeanette, were also able to visit England
and Paris among many more cities during their time abroad serving with the Army. 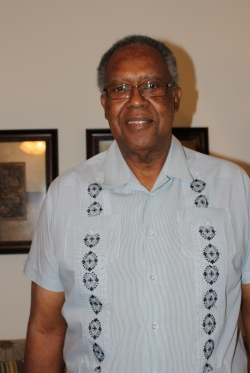 “If a young person is thinking about joining the military, I would strongly encourage them to do so,” said Tucker. The military will teach leadership, discipline, dedication and how to be steadfast,” he continued.

He also believes the military can open doors for young people and afford them opportunities they
may not be able to experience without joining.

Tucker is now retired and lives in Graceville with his loving wife, Jeanette. They have 3 children and 3
grandchildren.

“Recognizing and honoring our veterans and military service personnel is and will continue to be
a priority for me as the Executive Vice President & CEO of WFEC. Having served 4 years in the U.S.
Marine Corps, 11 years in the Air Force Special Operations and serving in Operation Enduring Freedom, I understand the sacrifices that have been and continue to be made for our freedom," said Ty Peel. Please join those of us at WFEC this month as we thank all of the veterans who made many sacrifices to protect our freedom," he continued.