Debra Kamke is retiring from West Florida Electric Cooperative (WFEC) after serving its members and  employees for 47 years. Her last day at the cooperative is this month.

Her career at WFEC began on April 15, 1974 in the data processing department. During her long career at the co-op, Kamke has served its members and employees in many capacities. She was a cashier before she moved into the Human Resources Department in 1990 as a personnel specialist. In 1996, she was promoted to Supervisor of Personnel and Benefits. In 2003, she was promoted to Manager, Personnel and Benefits, a position she held until her retirement. During her time at WFEC, Kamke has worked under nine different General Managers/Executive Vice Presidents & CEOs and seen many changes in the field of human resources.

Kamke says that during her time working in HR, and at the cooperative, the advances in technology were the biggest changes she saw that impacted the industry. These advancements made things much easier for record keeping and documentation – musts in the human resources world. “The first computer we had at the co-op was so big it took up almost an entire room,” she recalls.

“For twenty years, Debra has provided me with good, sound, wise advice, and contributed greatly to my success. I always teased her that I NEVER wanted to work in Human Resources. Ironically, in 2015 I was  offered the opportunity to shadow her in that very department. This gave me the opportunity to work even more closely with her. I give Debra much credit for the recruitment and selection of a workforce of the  highest quality and character. She has certainly been a mentor to me, both professionally and  personally, and I will miss her more than I can say,” said Penny Bryan, Employee Training & Development Coordinator.

Kamke was born and raised in the Graceville area and is a graduate of Graceville High School. She has been married to Gary Kamke since 1982 and they have two children, Kelli and Casey (Jessica) and two grandchildren, Zachary (7) and Jay (6).

“I began working at the co-op in January 1987, Debra was working as a cashier in the Graceville office so I met her on my first day of work while being introduced to everyone. She was sitting behind the counter with one of the sweetest smiles I’ve ever seen. I remember thinking to myself that she was one of the most pleasant people I had met. Thirty-four years later, and she still has the same smile and pleasant demeanor. She is without a doubt one of the most consistent individuals you’ll find. Always sweet, pleasant, personable and caring. She will be greatly missed by all of her co-workers who have come to know and love her,” said Terry Mullen, Manager of Marketing and Communications.

She is also a great storyteller according to her longtime co-worker, Susie Johnson, Executive Assistant to the EVP & CEO. “Debra is the best storyteller. She’s just a natural! She can tell a story and make you feel like you’re right there. My favorite is the infamous “bullet” story! We’ve watched one another’s children grow up and have shared many precious memories. We have laughed and cried together…and laughed until we cried. Our little co-op family will not be the same without her,” said Johnson.

As she retires, Kamke is looking forward to enjoying her hobbies of cooking, sewing and gardening. She looks forward to having more time to spend with her family and enjoying additional time with her grandchildren. She is also looking forward to traveling and being able to make spontaneous trips in the future.

“The co-op has been such a big part of my life for so long. It will be an adjustment to leave. I will miss the people I work with because we are a family. I’ve watched many of their children grow up and I will miss the camaraderie of everyone. I’d like to convey how much I appreciate the cooperative and how much it has meant to me and my family – past and present employees and trustees have been such a blessing to me. This has been a great place to work and I will miss everyone immensely,” said Kamke. 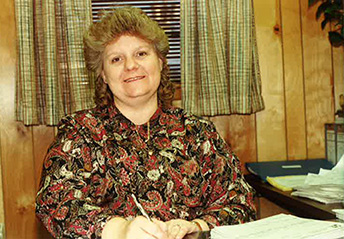 "It is one thing to be a boss, another thing to be mentor, but a completely different thing to be a leader. We are so lucky to be led by a boss, mentor, and leader like Debra. After working with her for 28 years, she will definitely be missed. Debra, may you be proud of the work you have done, the person you are, and the difference you have made. Happy retirement," said Shannon Holton, Supervisor of Payroll and Benefits.