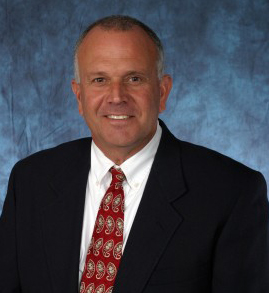 Ty Peel has been appointed Interim Executive Vice President & CEO by the Board of Trustees. His appointment was effective January 3, 2019.

A native of Washington County, Peel enlisted in the United States Marine Corps where he served four years
as a member of Marine Fighter Attack Squadron 235. During his military career, he earned his pilot’s license and attended the Marine Corps NCO Academy.

After his military service, Peel began his career at West Florida Electric Cooperative (WFEC) on January 4, 1982. His 37-year career began in the right-of-way department, but by the fall of 1982, he moved into the role of Energy Advisor. As an energy advisor, he performed energy audits for members and provided advice about how to conserve energy or make home improvements to assist homeowner’s with saving energy and money.

In 1985, he assumed the role of safety director where he was responsible for safety policy, monitoring safety incidents and ensuring the overall safety of the workplace. He was also responsible for ensuring the cooperative was in compliance with all OSHA and other state, local and industry safety regulations.  nsuring all employees received safety training and conducting electrical safety demonstrations were also part of his duties. After working as safety director, he became the Manager of Transportation & Safety, later
moving into the position of Manager of Loss Control. 80744002

In 1991, Peel made the decision to join the Air Force Reserve Special Operations Unit at Duke Field. While in the Air Force Reserves, he had the opportunity to attend the Staff NCO Academy as well as the Vincennes
University (Community College of the Air Force). During his tenure as Manager of Loss Control, his Air Force Reserve Unit was deployed as a part of Operation Enduring Freedom. He was stationed in parts of Southeast Asia including Pakistan and Afghanistan from 2001-2002. After serving his country during the war on terrorism, Peel came home and took on the role of Vice President of Engineering & Operations at WFEC – a role he held until being appointed Interim EVP & CEO. In 2006, he made the decision
to leave the reserves and focus solely on his career at WFEC. At that time, he had earned the rank of Master Sergeant.

From his military experience and career at WFEC, Peel has demonstrated leadership experience and earned industry certifications. He is a graduate of the Robert I. Kabat Management Internship Program Certificate (MIP), a program comprised of 189 business management and organization course hours. It provides in-depth analysis of the functions and processes of co-op management. MIP is held in the Fluno Center for Executive Management at the University of Wisconsin, Madison. He has also obtained the Certified
Utility Safety Administrator (CUSA) certification from the National Safety Council. CUSA is awarded to those who complete the Certified Utility Safety Program.

In addition to his service to the members of WFEC, Peel is also actively involved in the communities served by the co-op. He is currently a member of the Capital City Bank Board, where he has served for the past 11 years.

He is also Past-Chairman of the Tri-County Airport Authority Board, a board he was part of for  approximately 10 years, and the Orange Hill Water & Soil Conservation Board where he served for about eight years.

Ty and his wife, Marie, reside on his great-grandfather’s homestead in Washington County where he owns and operates a timber and small cattle operation.