Planting trees is an investment in the future. Beyond the obvious benefits of providing shade and enhancing the natural beauty of our surroundings, trees help improve our communities and our world in an abundance of ways, including many that we may not immediately notice.

While it is often easy to see the trunk, branches and leaves of a tree, it might surprise you to learn that root zones are often two to four times the diameter of the crown. Those root systems help hold and aerate the soil, filter groundwater and allow the trees to draw in chemical nutrients which otherwise could leach into the environment.

Decaying leaves, needles and other tree debris help enrich the soil, providing nutrients for grasses and other vegetation. This mélange of organic matter described by scientists as the “soil food web” includes a huge chunk of the world’s biodiversity.

According to researchers at the U.S. Department of Agriculture, millions of species and billions of organisms, including bacteria, algae, microscopic insects, earthworms, beetles, ants, mites and fungi, can
flourish in organic soil.

“The best soil on most farms is found in the fence row,” USDA officials said, citing its undisturbed properties. “It’s crumbly, dark and loose, and it’s a model of soil structure and organic matter for farmers who are trying to make their soil healthier.”

Trees Make a Lasting Difference
Trees take time to grow, but with proper care, after a few good seasons, a mature tree becomes a living air purifier. According to the Arbor Day Foundation, a mature tree can absorb 120 to 240 pounds of particulate
pollution every year. They reduce atmospheric sulfur dioxide and hydrocarbon emissions and absorb heavy metals.

And when it comes to trees, bigger is better. The experts say large mature trees absorb 60 to 70 times more pollution from the environment than smaller trees.

Let’s Plant More
The Arbor Day Foundation has set a goal of planting 100 million trees worldwide by 2022, the 150th anniversary of the establishment of Arbor Day. The organization hopes to enlist 5 million new tree planters, urging them to plant trees at home, participate in community tree planting projects and support reforestation programs wherever they are needed.

Trees 6 to 8 feet tall, planted around a home or building can shade windows during their first year. Within five to 10 years, they can also help shade rooflines, reducing cooling costs and energy use. Dense evergreens can serve as windbreaks, diffusing frigid breezes.

A local nursery or your county agricultural extension service can make recommendations on the best trees for your landscaping based upon growing conditions, space and design goals. 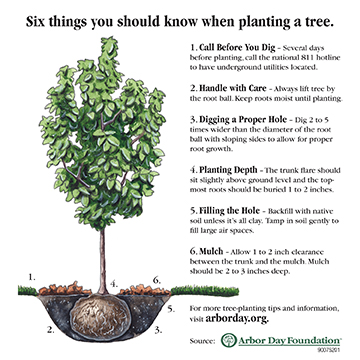