The Heart of Our Co-op: The LInemen

Linecrews work around the clock, sometimes in difficult and dangerous conditions, to keep power flowing to our local communities. Whether they’re restoring power after a major storm or maintaining critical infrastructure to our electric system, lineworkers are at the heart of our co-op.

When a storm hits, they set aside their personal priorities because Mother Nature doesn’t work around holidays, vacations, birthdays or even wedding ceremonies. A service-oriented mentality is one of the many admirable characteristics of an electric lineworker.

“It is my job to restore power, but outsiders don’t always understand that in some of the most dangerous times, linemen have to leave their homes and families to go out and risk their lives to help restore power for others. I don’t mind putting others first because when I decided to become a lineman, that’s what I signed up to do,” said Michael Boatwright, an apprentice lineman who works in WFEC’s Bonifay district.

Being dedicated to the job is also a key characteristic you will find in many of our linemen. No one wants to restore our members’ power more than our line crews. Recently, WFEC and its sister cooperatives have seen several severe storms that caused quite a bit of damage in the form of downed trees, power lines and  widespread power outages. On April 19th and 20th, some of these storms hit our neighboring co-ops hard and they needed assistance in the form of mutual aid. Our linemen volunteered to assist them with power restoration efforts and left their families and our cooperative members to help where they were needed. These men left on a Monday, April 20th, returning home on the following Wednesday to prepare for a round of storms expected in our area on Thursday. After working long hours the previous three days, our linemen jumped into action restoring power to the over 7,000 WFEC members impacted by these storms by Friday evening. In fact, WFEC also received some mutual aid assistance to restore power during this time. Unfortunately, these storms and power outages don’t always occur at convenient times. 100572001

Boatwright is a good example of the dedication our linemen embody on a daily basis. He got married on Friday, April 24, and immediately after his wedding ceremony, returned to work restoring power to the members impacted by the storms mentioned above. He said he felt going back to work immediately was the right thing to do because our members needed their power back on and he needed to be there to help. And, he's not the only one of our linemen who have done so.

“My wife, Danielle, has always been supportive. She knows what kind of work I do. She worries but she respects the job I do and is thankful that I’ve always come home safe,” said Boatwright.

Our lineman are not the only exceptionally dedicated people – our linemen’s families should also be recognized for their sacrifices and selflessness. They are also committed to our members and the co-op’s mission to provide affordable, reliable electric service to its members.

A lineman’s job may be to install, repair and maintain overhead and underground electrical power lines and equipment, but it’s also much more. It’s providing a service, it’s playing a part in the bigger picture, it’s working in dangerous or challenging situations, and it’s also grueling, tiring, hard work – often in adverse weather conditions whether that be extreme heat or sideways rain and strong, steady winds.

Although it is hard work in sometimes difficult situations, Boatwright says that he enjoys the fact that being 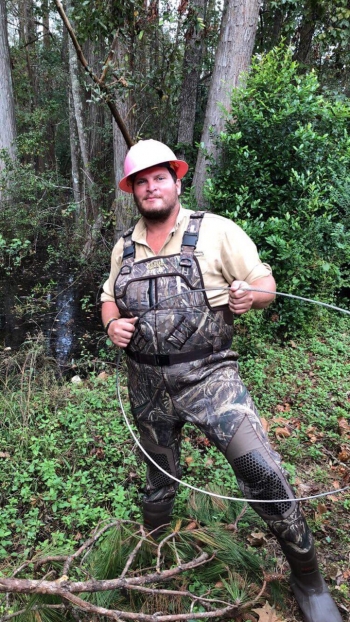 a lineman is a hands-on job, that it’s outside and that the electrical aspect of the job is very interesting to him. He also said that he enjoys being able to work for a small company with fewer employees because when you work so closely together you become a family. He said that when he hears the “all clear” after working extended outages that he feels thankful and that he’s relieved knowing that he and his lineman brothers have spent hours and sometimes days on end doing everything they can to restore members’ power.

Our lineman and their families are truly a breed of their own. Without their hard work and commitment to the job, our coop would not thrive. No matter the time––day or night, weekday or weekend––if the lights go out, so do they. Our lineworkers and their family members are brave, committed and critical to our coop’s success. So remember, the next time your power is out, so are our linemen. It is also likely that one of them is missing a family event, whether it’s a child or grandchild’s birthday party, graduation, cookout or even a honeymoon.

“My family is very supportive,” said Boatwright. “My wife and mom may worry too much, but they are proud to say they know a lineman and will stand beside me in any and every storm,” he continued.