Together, We Accomplished Much 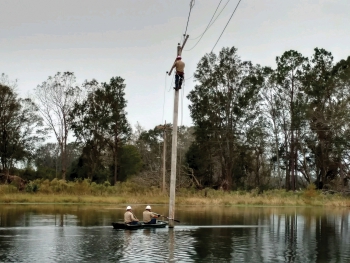 Helen Keller once said, “Alone we can do so little, together we can do so much.” Hurricane Michael had a devastating effect on our cooperative and the communities it serves. But, as we tackled the task of rebuilding our electric system – one that took over 80 years to build – we were never alone. Thousands of workers from sister cooperatives and contractors rushed to work alongside our own crews to rebuild what was lost.

On October 11, after Hurricane Michael had cut its path through our service area, over 27,000 members were without power. Thousands of electric poles lay broken on the ground and even more trees were broken and laying on top of them. Over 4,500 broken poles were replaced during restoration efforts. A large volume of costly line equipment such as transformers, regulators, breakers and capacitors were damaged and replaced. WFEC is in the process of collecting damaged equipment from across its service territory, but this undertaking will take quite some time since the co-op has thirteen substations and just over 4,800 miles of line on its system. The majority of our power restoration efforts are complete, but cleanup, repair and replacement is ongoing. We ask that our members remain patient with us as we clean up and restore our system back to the quality it once was. 89500001

Working alone, WFEC would have spent months repairing all that damage. That’s where “cooperation among cooperatives” comes into play. Thousands of lineworkers and right-of-way workers rushed to our aid from all over the country, in particular, co-ops from Florida, Alabama, Illinois, Kentucky, Mississippi, Louisiana, South Carolina, Tennessee and Texas.

The cooperative averaged a workforce of around 1,200 for the 28 days it took to restore power to the majority of our members. At the peak of power restoration efforts, this workforce swelled to 1,600. These men and women worked over half a million hours restoring power to over 27,000 WFEC members during that time period. In comparison, in an average month, WFEC employees alone work an average of 15,695 man-hours.

We cannot begin to express our appreciation to these individuals, our sister cooperatives for sending them, and their families who generously did without their presence for days and weeks at a time. Thank you. 32409001

To our members: thank you for the kind gestures shown to our line crews by bringing snacks or drinks to them or simply providing a word of encouragement or kindness when they were on the brink of exhaustion. You are why we were able to keep going and to persevere throughout this challenging time. To everyone who fed us, washed our laundry, sent a card or commented with a word of encouragement on social media – thank you.