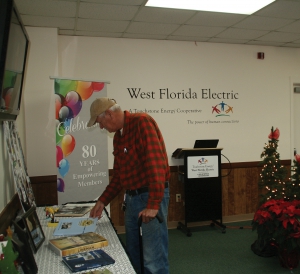 on Tuesday, December 12, 2017. The cooperative was founded by a group of visionary rural residents
in Calhoun, Holmes, Jackson and Washington Counties in 1937 and its Articles of Incorporation were
filed with the Florida Secretary of State’s office on December 11, 1937. The first meeting of incorporators and members of West Florida Electric Cooperative Association was held on December 21, 1937 in Marianna, Florida.

At this meeting, applications for membership in the cooperative were approved and bylaws were adopted. A.J. Crutchfield was elected to serve as West Florida’s first Board of Trustees’ President; A.M. Andreasen was elected Vice President; and W.R. Powell was tapped as Secretary/Treasurer. A.J. Crutchfield, A.L. Williams, W.R. Powell and L.F. Mathews were selected as solicitors to secure applications for membership and easements for right-of-way. These solicitors of membership were encouraged to secure 300 applications within the shortest amount of time possible through grassroots efforts. The next two years were very busy for the fledgling co-op, signing up new members and growing each day. 24323002

Membership in the cooperative was set at $5, which was a hardship for some, but they managed to find the
money because they wanted electricity. The cooperative's membership fee remains five dollars today.
In May 1938, Claude H. Smith became the cooperative’s first general manager and the cooperative’s
first annual meeting was held on May 2, 1938. President A.J. Crutchfield, gave a report on the present state of the cooperative and outlined in general terms the plans for construction of electric distribution lines in Calhoun, Holmes and Jackson Counties. Washington County was also added to the first electrification project later that year. Members of WFEC present at the meeting agreed to borrow $100,000 to build the original 100 miles of line serving Calhoun, Holmes, Jackson and Washington Counties.

Now that the cooperative was signing up members and had a general manager, the next step was to begin
building power lines to serve those members. In 1939, WFEC began hiring linemen and training them to
build lines. Early line crews were often made up of unskilled workers and farmers and line work wasn't easy or glamourous. It was hard, backbreaking labor that didn't always go smoothly. But, linemen continued to work hard in adverse conditions to bring the American dream of electricity to rural America, and new farm families received lights each day. Some members of the new REA co-op in Calhoun, Holmes, Jackson and Washington Counties began receiving electricity in April of 1939. In addition to the cooperative’s loan to build power lines from REA, they also borrowed $10,000 so they could provide financing to members to have their homes wired and plumbed. The Board voted to allow members to finance up to $400 to have this done.

The offices of West Florida Electric Cooperative were moved from Marianna to Graceville in 1939. This
decision was made by the Board of Trustees since the work was centered in that area at the time. The move was to be temporary; however, WFEC’s offices are still located in Graceville today. 46091003