Honest. Devoted. Full of Integrity. Quick-witted. Fun to be around. A family man. A man of faith. All of these 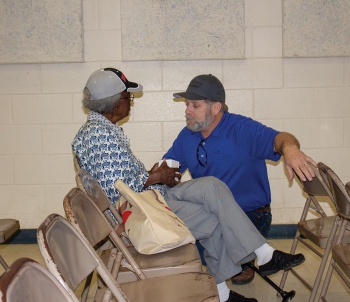 words and phrases and many more can be used to describe the kind of man Harold Dunham was. Dunham, who worked for West Florida Electric Cooperative (WFEC) for 32 years, lost his life in a motorcycle accident on September 17.

Dunham started his career at WFEC in July 1987 as a tree trimmer. He also held many other positions at the cooperative including right-of-way foreman, apprentice line worker and journeyman line worker. He was Manager, Operations & Construction in the Sneads district at the time of his death.

“It’s hard to put into words the kind of man that Harold was. He genuinely loved people and made sure they knew it. He was one of the most honest and devoted men I have ever known – devoted to his wife, his family and his job,” said Donnie Worley, a long-time friend and co-worker.

It never took Harold long to make a positive impression on those he met. He touched so many lives during his life by lending a hand or a listening ear. If a co-op member in his district had a problem, it became Harold’s problem. He took their issues personally and worked with them to find solutions and help them.
When new employees moved to his town, he made sure they felt welcome and included. He wanted them to feel at home in his community – a community he loved and believed in supporting.

If you talk to anyone who knew Harold, they will tell you that wherever he went, he made friends. He always looked for the good in others and looked for the positive in any situation.

“Thank you, Harold, for being my friend and confidante for over 31 years. I miss you now but am looking forward to seeing you again in Heaven one day,” said Randy Weeks, a journeyman line worker, friend and co-worker at WFEC.

Harold recognized others for their contributions and uplifted his friends and employees. He was a very humble man who rarely took credit for his accomplishments. He was committed to the safety of his employees and strove to make things better for them each day. He was an excellent communicator.

“Man. This word is a small word that labels a person. It can be used in a very insignificant way such as to point one person out. I knew Harold Dunham to be a Man but I use that word in a very significant way. You see, Harold was much more than just one word can explain. First and foremost, he was a Christian and firm Believer in Jesus Christ. He was the epitome of a devoted husband and father. He was a wonderful supervisor and co-worker. Harold will always be The Man. The Man I call my friend. And Harold, I’m still working on that wing at the Harold Dunham Infinite School of Wisdom. I will see you again. I love you, Man,” said Will Melton, a close friend and line crew leader in the Sneads district.

Harold was a devoted family, man who adored his wife and family. He leaves behind his wife of 35 years, Kim; two sons, Garrett and his wife, Casey and Taylor and his wife, Samantha; a grandson, Connor; two granddaughters, Whitley and Savanna, and a grandchild on the way.

“There is no single word to describe Harold Dunham. A man of impeccable character who loved his God, his family and the employees of WFEC. Harold treated everyone with respect and taking care of his employees and the members of WFEC were his top priority. Harold’s word was his bond. He never backed down from an issue or situation. His ‘we’ll get it done’ and ‘I’ll take care of it’ was his trademark in his role as Operations Manager at the Sneads office. I will miss our working relationship but also our friendship and the honest conversations we often had. I will miss you, my friend along with thousands of others whose lives you touched during your brief time here,” said Ty Peel, WFEC Executive Vice President & CEO.

Harold's jovial spirit, boisterous laughter and loving demeanor will be missed at WFEC for many years to come.